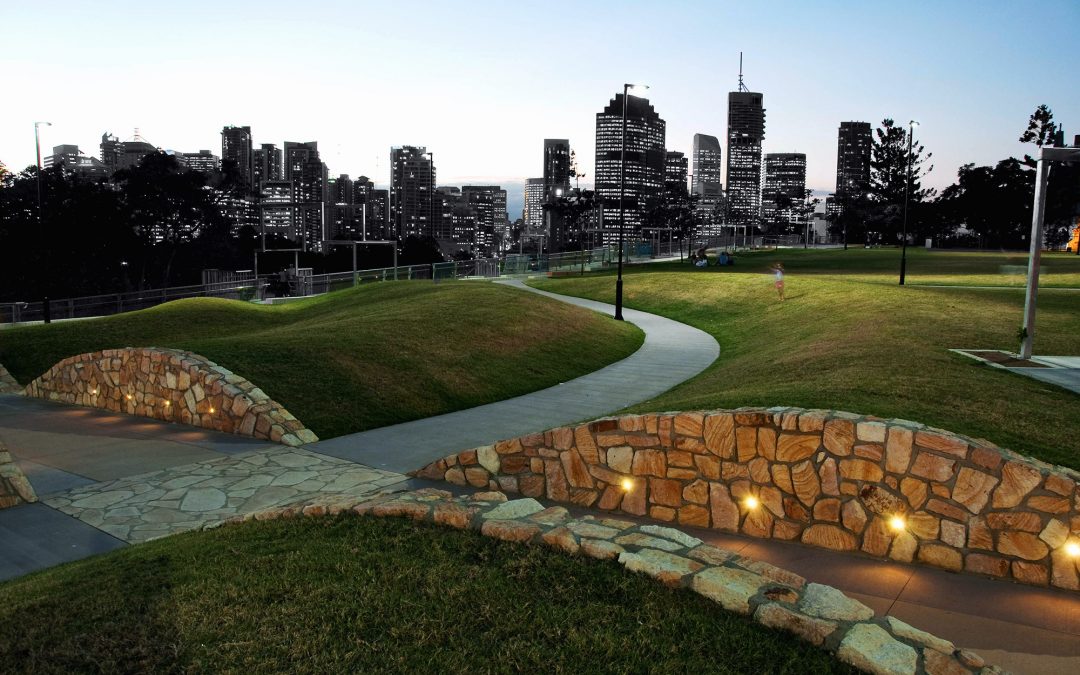 To celebrate Queensland’s 150th year the State Government is making a grand gesture by creating a major new public park at Kangaroo point. The new Q150 Park at Kangaroo Point will be one of the most dramatically sited parks in Australia and provide an enhanced visual and physical experience for the visitor. Whilst park users will be drawn to the dramatic edge of the park which provides a grand vista of Brisbane, they will also be able to experience two major land art works, the scope of which has not been seen before in Queensland. The government has taken a significant step in supporting significant public art that manipulates the landscape rather than adding a sculptural work to or on it.

A park is a theatre of the everyday. If we could daily record on film the activities that take place in a park and then speed up the accumulated recordings we would see and feel the living heartbeat of humanity itself; we would have a film that charters movement, encounter and rest. We would also have the ingrained scripted stage movements of our actors, the park users.

Of course we cannot observe time like this except as a recording but we sense the traces of human use in the park even when we are the only ones there. For most of us the park signifies a quiet place where we come to slow down. Its empty stage offers a chance for contemplation and to watch the slow growth of nature over time.

How then does one make art in this environment? First and foremost parks are already constructed natural environments; they are already designed spaces. Some are more designed than others with a range of conceits and concealments. Is it the artists role to

decorate, or add the finishing touches with a sculpture or to work with the social significance of the park, or indeed to mould the landscape?  Can an artist enhance the experience of the already ingrained expectations of a park that people have?

It is the idea of the park as a theatre of human interaction and natural growth and a commemorative site that Buderim based artist Nicole Voevodin-Cash, well known for her grass and planting works, explores for the new Q150 park at Kangaroo Point.  She has created two key works which are separate yet entwined.  The Green Room is series of undulating grass contour mounds which move over a rise in the large open grass expanse of the park and spread towards the more hard edged stairs that flow to the park kiosk and visually to Brisbane itself.  The other work, Afforest, whilst establishing a forest on previously unforested land, provides a curving arbour walk that is a play on movement, colour and the manipulation of natural growth through species selection and training.

Some people will barely notice a difference and adjust to the works as part of the natural landscape.  Others will be surprised by the shifts and moods that the artist creates. But there is much more in Voevodin-Cash’s works than just subtle physical interventions in space.  Her works are redolent with references to Queensland history and culture. The Green Room, not only refers to the chill out space in a theatre but also to the term used by surfers to describe being inside the barrel of a wave and this beach culture reference is even further accentuated by the large purple umbrellas to be sited on the wave like contour mounds.  From above this work looks like a ripple in the land and it reminds us that even the smallest idea or action sends a ripple out into the world and 150 years ago our independence from NSW resonated and grew to allow us to be a strong and independent state.

Afforest consists of 150 trees (and incorporate three indigenous pine species, a timber tree and a flowering tree, all from the dry rainforest areas surrounding Brisbane) that represent the 150 years of our independence and which also reminds us of our need to take an even longer look back to a time when indigenous peoples were custodians of the original forests on this site.

This is a work that is designed to grow into a sculptural structure, both in its fullness as a naturally shaped forest and in the detail such as in its woven and shaped trees, where six trees either side of the entry to Afforest at its southern end and two western side entry points of the arbour will been trained to grow together like a giant open plait.  Mirroring the contours of The Green Room, the forest consists of avenues and lines of species – hoop, Wollemi and cycade at the back, kauri in the middle and ash in the front, the protector of the forest which provides shade as people move through it. As these trees grow they help to create spaces and moods and powerfully represent life and the development and growth of the state of Queensland. The arbour meanders its way through the last 2 avenues of trees crossing it like a DNA strand, further emphasizing the trees as the DNA or life force of the site. Unlike the beginning of our independence in 1859 where there was no visual documentation our 150th birthday gift or marker will be a lasting, growing and changing reminder of our celebrations.

Both The Green Room and Afforest are also about enhancing the way people use the park and about the park as a theatre.  Ironically The Green Room suggests a room, but this room is an open environment; it is a space which brings people together, confines them if you like, to interact and encounter others and to play. It is an artwork that people will be able to walk through, sit on, play on, picnic on, sleep on, dream in, and meet at, and from afar they will be able to admire and enjoy it shapes and colour. The (purple) umbrellas of course will further focus these activities as a room within a room.  Whilst The Green Room is more a contained ampitheatre like space where the theatre takes place on the ampitheatre seats as opposed to the stage, Afforest is more a space in which people move through and under and is like a giant tunnel of nature joining a series of spaces or rooms.  In this sense it is a different kind of contained space which exaggerates and heightens the visitor’s relationship with nature, emphasising through the shaped tree mans manipulation and control of nature and their role in the natural environment.

One cannot forget the larger view of the park overall and the way the park is connected by a ribbon of paths that take you from one point to the next and to a range of different discoveries.  Voevodin-Cash’s works provide two new points of interest in addition to the kiosk and viewing platforms. She has also thought to see her work from the macro perspective and has provided a range of strategies to link the features of the park and surrounding features outside the park using colour and light. The forest and arbour spine visually link the church with its large feature Jacaranda to the park with a line of purple petrea planting over the arbour. This also connects to the large purple umbrellas. At night, the mood of the arbour will be further enhanced by purple lighting. Likewise a row of warm white lights will light the central pathway through The Green Room, reminiscent of theatre row lighting. The trees to the right on entry to The Green Room will glow red on returning and walking out of the space the colour will change to a warm white. Whilst the colours and lights add depth and romanticism to the site they also are playful.  Voevodin-Cash is not content with one mood but wants to reflect the diversity of human feelings. The park is a place for everyone, a space that allows for both public and private activities and a levelling of social class.

Finally Voevodin –Cash recognizes that a park must be for 2 seasons, not just for summer but also for winter where people can enjoy open sunlit spaces and also enjoy romantic and intimate evening interludes in private spaces.  Her work is not just aesthetically pleasing but also highly practical and recognizes how a park can change naturally over different seasons or by human intervention, such as the addition of umbrellas and the shaping of trees.

In essence her work has all the emotional resonance and intellectual engagement that an artwork is capable of whilst also drawing from the rich experiences that a public park can provide. Voevodin-Cash is an artist whose materials and work will grow and live on and change well past the length of her own life.  This is her gift as an artist to the future.