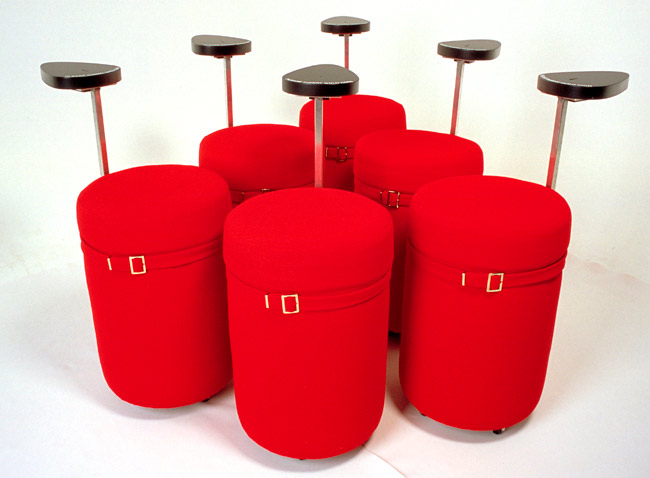 Nicole Voevodin–Cash’s playful practice is furnished with unusual materials, from plastic bags, heaters, lights, batteries, velvet, kangaroo skin, astro turf and living turf to the more conventional wood, glass and polished aluminium. She crosses the disciplines of art, craft, design and commercial production, working both on large scale site-specific projects and on an intimate scale reproducing domestic items. She vacillates between working within the traditional exhibiting space of the gallery environment and outside it, on outdoor projects that employ their surrounding environment.

Couch 2003, is a life-size representation of the style of seating often found in gallery spaces. The work is cut from a 10mm thick sheet of aluminium, industrially produced to the artist’s specifications, and etched with a mechanical router. Voevodin-Cash de-burrs the edges and polishes the surfaces by hand, in a sense reclaiming the domestic nature of her subjects from the industrial methods that she needs to employ to realise them. This 2.4m long freestanding silhouette of a gallery couch continues Voevodin-Cash’s investigation of the role of furniture and people’s engagement with it in public and private spaces.

Over the last five years Voevodin-Cash has created a series of domestic furniture with interactive components such as Bedside Table series 1998–2000 and Footstool series 1998–present, all of which call into question accepted ideas of the functionality of everyday household items. Where previously she has played with our relationship to domestic objects, now she is playing with our relationship to the exhibition space.

With Couch 2003, Voevodin-Cash explores the way gallery spaces function and the role of furniture within that space. She refers to the conventions of a gallery environment that require, on a practical level, that there is often only very limited seating, and that visitors are usually discouraged from touching the objects. Interestingly, Voevodin-Cash’s practice usually works against this situation by encouraging viewers to engage with her work in a direct and sometimes startling or unexpected way. She has used interactivity as a method of exploring the relationship between the work and the viewer. ‘My focus … has been on the construction of furniture, or more particularly, on cabinets, boxes and containers, which conflate functionalism and interactivity. All are intended to be touched, caressed, sat upon, opened, and otherwise engaged with by the gallery viewer.’[1]

With her latest work, however, Voevodin-Cash almost confounds what has been an important part of her continued practice – an engagement of the senses. The only concession this work makes is to an element of tactility in the texture of the routered aluminium, and yet it can not be touched. This highlights a series of paradoxes. The work represents a functional item, but it cannot be used; it gives the illusion that you can interact with it, but you can’t; it gives the appearance of three-dimensionality, but it operates within a two-dimensional plane. Voevodin-Cash has subverted the very purpose of gallery furniture – to provide a place from which to view art – instead situating her Couch 2003 as the art to be viewed.

Similarly, a recent sculptural installation Invasion 2003 comprised a number of aluminium silhouettes of the iconic Weber bbq installed on the grassy verge of a lake and Rug 2003, recreated in turf and mondo grass was embedded in a lawn within a garden setting. With each of these works Voevodin-Cash deployed domestic items, reinserted into an outdoor setting, just as, here, the gallery seat is repositioned within the gallery space. Each intervention has the effect of transforming the previously familiar objects and our relationship to them.