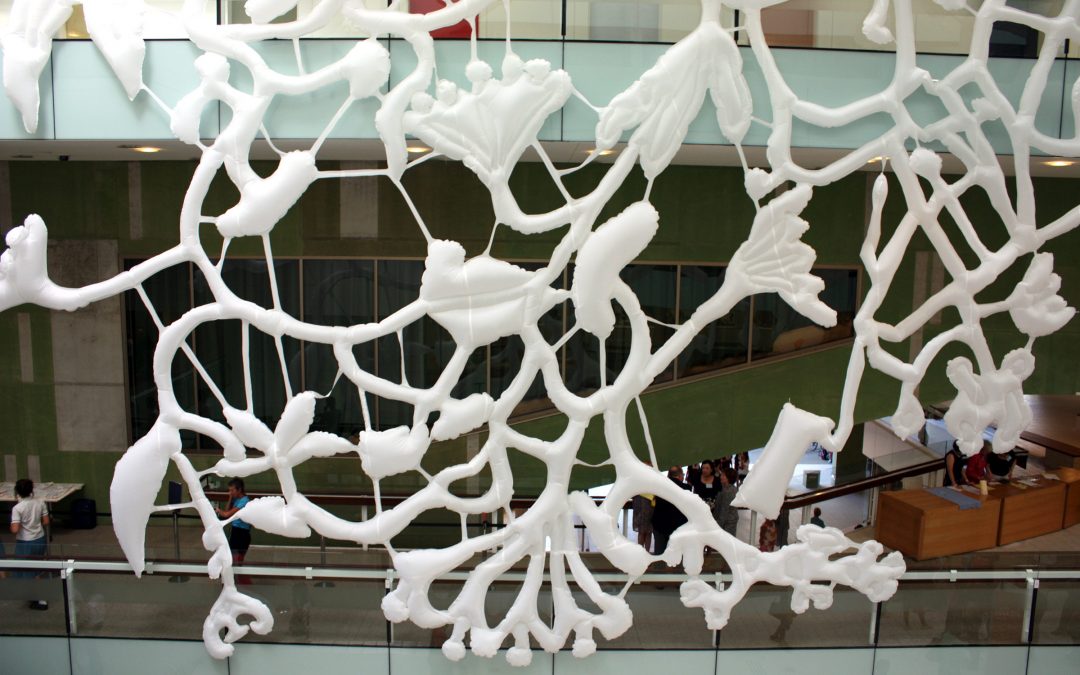 The LANDscapers project takes its point of departure from a concept of the artwork as an event rather than an object. The artists, (Nicole Voevodin-Cash and Elizabeth Woods), and audience collaborate in rearranging the spaces of city life, prompted by a temporary intervention into their hubs of pedestrian traffic. This organic, inflatable, ‘event’ migrates to hotspots of Brisbane’s cultural milieu and temporarily transforms the spatial basis of social interaction. Temporary public artworks such as LANDscapers have a special quality of novelty, notation and surprise that play an important role in a community’s vision of themselves in urban frameworks – how they habitually live their lives, and how they want to live otherwise. The unique qualities of immediacy and spontaneity also give temporary public artworks an inherently experimental quality, resonating with human desire for change and stimulating creative thinking. With the LANDscapers project in particular, the transient, re-locatable nature of the artwork becomes something of a social experiment that tests our human sensibilities against the grain of built and natural environments. Its progressive relocation to different venues bears the imprint of Brisbane’s city life and tells its own story about this people and place.

LANDscapers involves an enormous piece of white diaphanous fabric that is inflated over several days to wrap itself within and across large open spaces that punctuate the density of city life. It is conceived as an artificial garden that literally grows into a space. The fabric’s organic malleable qualities allow the garden to fold into corners and run up walls, moving gently with the currents of outside breezes or the draft of passing pedestrian traffic. The brief from art + place was to provide a temporary intervention into areas of regular public access and high pedestrian traffic, providing unusual ways for artistic expression to infiltrate public consciousness. The concept of a garden inflating itself amid metropolitan life inherently suggests a pause in the pulse of life, or a moment of respite and reflection. It softens the edges of traffic grids and the city’s linear patterns of life. The inflatable nature of the material is intrinsically temporary and pliable, urging us to look closely at our environment and care about it. In terms of its almost architectural scale, the artwork draws attention to the invisible spaces of the built environment as form or substance – not empty but active. This garden wants people to cultivate the potential of urban spaces.

The origin of the project developed with an installation created for the Contemporary Art Spaces Tasmania (CAST) gallery in 2008 where Voevodin-Cash and Woods were commissioned to produce an artwork responding to their artistic interests in regionalism, the natural environment and community involvement.

This Hobart project became a case study in site specificity involving social activities of walking, sense-mapping, landscaping, cooking and sewing. Initial stages of the artwork aspired to create a kinesthetic and psychological register of Hobart’s urban environment, with the two artists tracking their walk through city streets and compiling a visual diary of their progress. Their sketches were based on abstract experiential responses to the walk, rather than simply visual responses. Aspects of local flora, the shape of roads, and direction of their travel, fed into a continuous flow of visual compression. As Kevin Wilson describes it in the CAST exhibition catalogue, “This was landscape design or topography as a kind of psycho mapping. But above all the whole process was more about walking, seeing and connecting than trying to represent any larger symbolic or representative issue or viewpoint.”

The next stage in developing the artwork involved production of a fabric ‘skin’ for the walk experience that would be inflated into the CAST gallery space on completion. This phase of the project amplified the artwork as event, drawing on community groups such as gardening and walking clubs, and individuals who helped with conversations about the locations, tacking and sewing the fabric, and sharing cups of tea and meals. The essence of this artwork event was social interaction based on a common experience of a place, and effectively transformed the gallery space into a Warholian ‘factory’ of collective ideas about the substance of life in the suburbs of Hobart. At this stage of the project the art object itself was more of a ‘gardening tool’ that served different functions for different groups of people.

In 2009 Arts Queensland’s agency for public art, art + place, commissioned Voevodin-Cash and Woods to re-install (and re-inflate) the artwork in a series of venues around Brisbane. The functional object of the inflatable garden was thus translated from gallery installation art into re-locatable temporary public art. The inherent functional contingency of this artwork facilitated this shift. In an article on “Temporarility and Public Art”, Patricia C. Phillips describes the essence of temporary public art as a social experiment. She considers “the intense compression of ideas that occurs in a temporary urban site in a squeezed period of time” and how;

It must rely on its flexibility, its adaptability to be both responsive and timely, to be both specific and temporary. Ephemeral public art provide a continuity for analysis of the conditions and changing configurations of public life, without mandating the stasis required to express eternal values to a broad audience with different backgrounds and often different verbal and visual imaginations. (335).

Other critics describe how temporary public art pivots attention through its novelty and transient gesture, “intensifying, clarifying, mystifying, transforming what is already there” (Johanson, 338), and feeds into the stimulating and invigorating effect of change itself, becoming “a symbol of creativity that energizes the whole area” (Sugarman, 341). The re-locatable nature of the LANDscapers temporary public art project determined that the social experiment becomes comparative and somewhat narrative in method. It describes specific differences in our Brisbane urban spaces, and maps its changing rhythms of public life.

In its first venue LANDscapers experimented with a very high rate of pedestrian traffic in the inner court of the State Library of Queensland (SLQ) at Southbank. This recently refurbished building with its courtyard accommodating restaurant, bookshop, and points of access to Library collections, computer laboratories and lecture theatres has become one of Brisbane’s busiest pedestrian intersections. Tourists, students, and visitors to the SLQ, two venues of the Queensland Art Gallery, and the Queensland Museum, walk through and around this courtyard throughout the day and into the evening. LANDscapers was installed in this space as part of the Queensland Government’s Ideas Festival, which is an annual public event aimed at inspiring creativity and innovation in the Queensland sectors of arts, science and industry.

The largest expanse of open space in this courtyard is actually its vertical atrium that extends to a height of six floors, and thus LANDscapers was installed in a vertical two-dimensional format along one of the walls and against some of the open corridors on different floors. This experiment in vertical installation succeeded in notionally condensing the layers of activity in the building into a wholeness not usually perceived, however its suspension several metres off the ground effectively diffused its conception as a garden. In some sense it lost touch with its interactive pedestrian perspective and thus its essence as event, and became more distanced as art object or mural contained to a wall. Passers-by on higher levels of the building had a different perspective, but their slice-view of the work still negated its garden-effect.

LANDscapers regains its ‘grounding’ in all of the other venues, wrapping itself in and around pedestrian traffic and public gatherings. The social experiment shifts to sites of cultural performance, forums of industry, and commercial centres, before its return to another venue at Southbank – the heart of Brisbane’s leisure and cultural activity.

The inside and outside eye

George Sugarman, a longstanding creator of public artworks in the United States, describes how the spatial context of viewing art frames our different modes of perception based on ‘the inside and outside eye’. He writes,

The indoor eye is the enemy of public sculpture. Habituated to the surroundings of a room, it erects a container around the outdoor work, and separates it from the light, the air, the traffic, the buildings that are its natural habitat. The indoor eye forgets that the sculpture’s presence moves with the time of day, that a strong sun can split it with brightness and deep shadows, a soft light can give it a deceptive coherence, rain can obscure it, and a background of snow can give it a startling strength. (340).

Sugarman suggests that when we see artwork in a gallery space that we concentrate awareness on details within the artwork and attempt to block out its context of display. Public art displayed in public spaces engenders an ‘outside eye’ that absorbs not only its spatial context, but also all kinds of peripheral conditions – light, sound, touch, movement, and activity in a state of flux.

Whilst we are very unlikely to experience the background of snow in Queensland, the event of LANDscapers as it drifts its way across Brisbane, gives audience an opportunity to oscillate between this ‘inside and outside eye’. In its installation in the downstairs gallery space of the Museum of Brisbane, the artificial garden breaks the barriers of the ‘inside eye’ by bleeding out beyond the gallery spaces into the stair well and up and across windows and pillars. It takes on the classic form of installation art, but in so doing blends the gallery space with areas of public access and traffic. Its organic white fluffy minimalism creeps through notions of art and architecture, municipal institutions (the Museum of Brisbane is located in the lower levels of Brisbane’s City Hall), and social history. In the Old Museum venue, LANDscapers appears in one of the studio spaces where classical music performances occur, and grows up walls across spectacular heritage-listed stained glass windows that project a dazzling array of shifting light and colour. Here the inside eye of a performance space meets the outside eye of heritage-listed architecture in all its grandeur and historic moods and character.

The temporary nature of LANDscapers finds an acute edge in its one-day installation at the Brisbane Convention Centre. Here the garden appears in the transitional space of the foyer and welcomes the Australian Institute of Architecture’s Queensland membership to their annual State awards. The unique inflatable character of LANDscapers allows public art to make an emphatic intervention into this brief one-day gathering of those who create our built environments. The beauty of LANDscapers lies in its opportunism, and its ability to create an amplified public statement in all sorts of places and spaces, and at short notice. Its seductive aesthetic is so obviously about softening the edges of urban life and offering a place of respite and reflection that it needs no explanatory text or deep familiarity with abstract art.

The final deflation of the artwork will bear the marks of its travels – collected dirt and residue from the atmosphere and public touch. But it will have left marks as well, and planted seeds all over Brisbane about what it means to live in this city, and what it can be if we turn our minds to cultivating it.